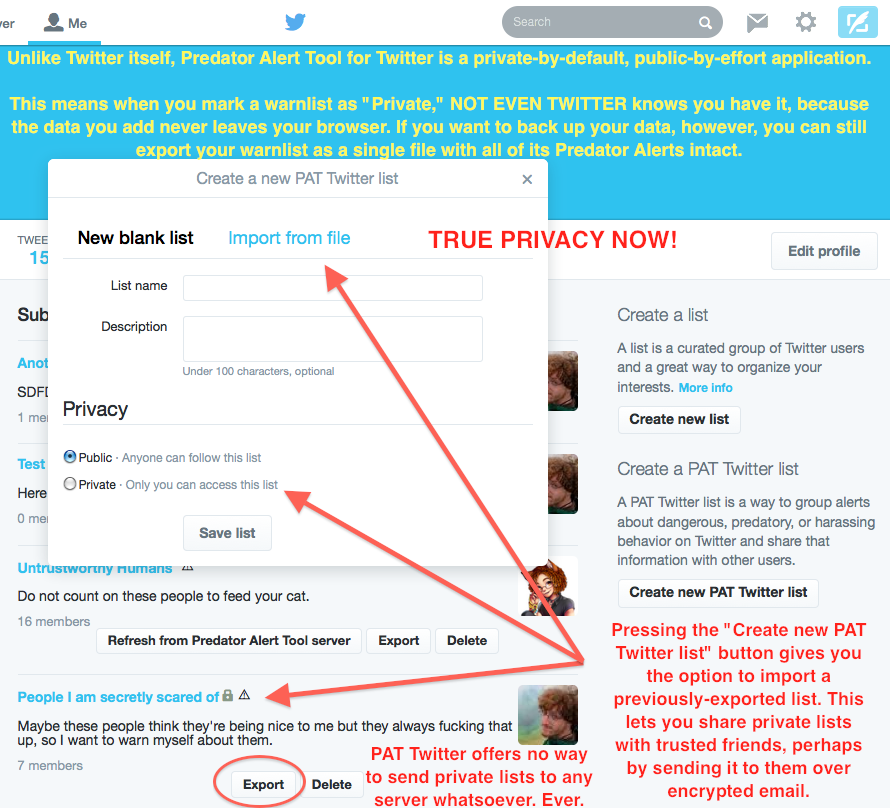 What’s important to understand here is that when you “delete” something from a service like Twitter or Facebook, you’re not actually deleting anything. All you’re doing is asking them, to please not show that to anyone anymore. But those companies still keep a copy of the thing you supposedly “deleted.” Y’know, for their records. They’ve been doing that ever since the start. And if you thought you had embarrassing photos on Facebook, have you checked FetLife lately? Yup, FetLife is even worse in this respect.

Another consideration showcased in the Predator Alert Tool for Twitter screenshot shown here is the notion of “data portability,” or the idea that “you can take your data with you wherever you go.” That’s why each warnlist you make also includes an “Export” button, which gives you a plain text file containing a backup of your warnlist’s data, including all of the Predator Alerts you added to it. If you use multiple browsers, you can export a list you created in Mozilla Firefox and import it into Google Chrome, for example. And when you do that, it stays in that browser.

You can also use the “Export” feature to share warnlists in a truly private fashion, such as by sending the exported list to a friend over encrypted email. Of course, your privacy is ultimately your responsibility. The point here is that Predator Alert Tool for Twitter is designed to help you maintain that privacy with as little effort as possible. Inversely, the MO of sites I’m building Predator Alert Tools for, like Twitter, Facebook, FetLife, and OkCupid are all about violating your privacy.

For a higher-level overview of the upcoming Predator Alert Tool for Twitter, see my user interface preview. And, as always, donations (especially of food) are appreciated. Okay, back to work I go.