CryptoParty Albuquerque, the first cryptoparty in New Mexico, was a huge success. It was by far the largest CryptoParty I’ve ever had the pleasure to help organize, with over 35 people showing up for the very start and more trickling in throughout the day. Due to its size, the format of the CryptoParty varied from other, smaller ones that I’ve hosted before.

We had pizza, popcorn, and drinks set up in the back of our space, where most people gathered to socialize and mingle and get to know one another pre-party. Then, shortly before the start of the event, we cranked up the volume on the four-panel main screen at the front of our space and played the excellent CryptoParty intro video, featuring excerpts from JuiceRapNews, and clips of interviews with Jacob Appelbaum, William Binney, and others. You should watch it, it’s fun:

By the time the intro video had played a third of the way through, everyone in the space had gathered around to watch it: We immediately followed that with two whole-group introductory presentations. I had spent the past few days making a “Welcome and Intro to CryptoParty Albuquerque” presentation, which I presented first. It included an introduction to threat modeling and discussed the importance of pro-privacy and anti-surveillance thinking. My presentation was not recorded live, but I recreated it in this video of the slideshow I used:

Our presentations were ten minutes each, so with the ten minute intro video, these three parts of the CryptoParty took only 30 minutes. So we broke the group into separate “Mobile” and “Desktop” workshops, intending to cover as much as we possibly could with such large groups. I lead the “Desktop” workshop session and within the next hour and a half or so, most folks who participated (more than 15) left having installed TorBrowser, OnionShare, and one of Mailvelope, MacGPG, or Thunderbird and Engimail. They also generated a keypair, submitted their keys to a keyserver, and tested sending encrypted email to one another. Everyone who created a keypair successfully sent an encrypted email! There was even a college student who brought her mother to the CryptoParty, and both of them were able to successfully send each other GPG-encrypted emails.

I don’t know exactly how well the mobile session went, because I wasn’t there, but from I heard, the results were similarly great. Most folks left the workshop having TextSecure and Redphone (for Android) or Signal (for iOS) installed and working, and had verified one another’s fingerprints. I also heard there was a lot of success getting Orbot and Orweb installed on people’s Android devices, and OnionBrowser for the iOS users.

There were also some folks who didn’t go to either breakout workshop, either because they didn’t bring any devices at all, they were just there to socialize, or because they were already familiar with what we were teaching. I also noticed that some of the folks who said they were familiar with the technologies we’d teach really moved up and helped the people sitting next to them get things installed in the odd case where something didn’t work or someone was feeling a bit lost. It was so great to have that much in-crowd help for groups this large!

Mostly, the rest of the folks hung around the food area to socialize, but they also explored the various “activity stations” my fellow CryptoParty host and I had set up before the start of the party. These included an old laptop running WireShark, an old MacBook running Tails off a USB stick, and a “Ask a Hacker” box that people could write questions on index cards and drop in the box to be answered later. The Tails demo station and the WireShark network traffic viewing station generated a lot of really great questions from people, and I think everyone enjoyed having the ability to click around on the computers knowing they weren’t going to screw anything up, particularly the people who had never heard of WireShark or Tails before.

In addition to the “Activity Stations,” several local artists set up their artwork around the social areas of our party space. Behind the food, there was a flatscreen TV showing a demo of a new game design tool called MeshTracer, courtesy Kurt Hollowell and DogEatDogGames.com, which looked something like this:

On the other side of the social space were these hollow glass sculptures filled with various different gasses, created by Albuquerque local Carl Willis: All throughout the space, including in the workshop areas, we also printed up a bunch of CryptoParty posters and other artwork along a cypherpunk and anti-capitalist theme. This set of posters taped on one of the pillars was my favorite: Other posters featured Anonymous-style Guy Fawkes masks with derisive things about the NSA, retro-style Tor promo posters, and the like.

After the breakout workshops, everyone regrouped for a short debrief, where my fellow host and I answered some of the “Ask a Hacker” questions. One of the questions was “How secure are my dick pics?” Another was about BitTorrent, so I referred folks to the beginner’s BitTorrent guide I wrote up previously. Here’s a pic of us doing that: 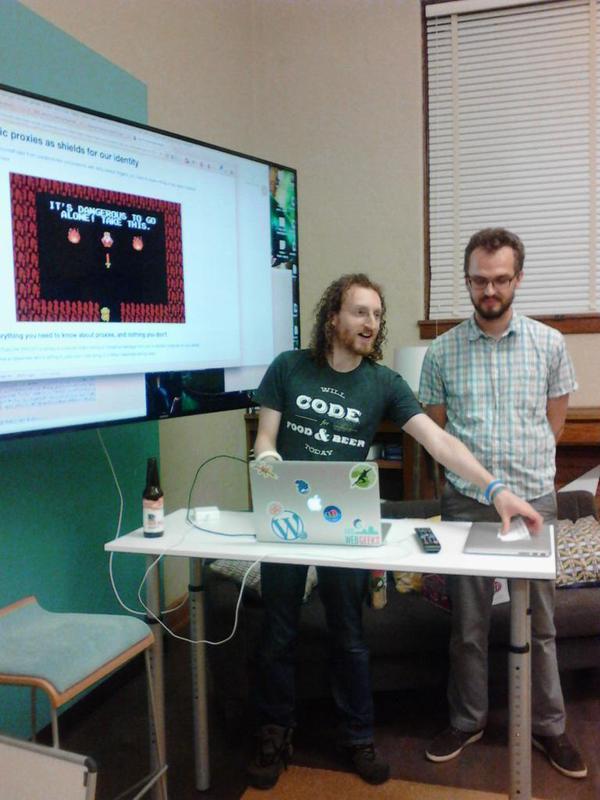 By this point, the band was all set up and ready to play, so we were all treated to a live Ugly Robot set! They gave away free merch (I won an Ugly Robot shirt!), lead us all in a “dance like a robot” mini-march, and got me in trouble for figuring out how to turn off the lights in the venue (kill the right breakers, duh) so that their custom-programmed visualizers behind them would look better. (LoL, capitalists and their “entrepreneurial” venues don’t know how to have any fun.) While the band played, the more technical among us had a keysigning party, where we signed on another’s pre-existing GPG keys, and showed the less experienced what this was all about. There was still pizza and beer, which was good because more people showed up specifically to hear the band. They got in the fun, too, though, and most of them left with EFF handouts and other pocket guides for how to deal with police harassment that we had printed up and placed on all the clear surfaces.

By the end of the night, people were already talking about CryptoParty Albuquerque number 2, and several folks suggested different venues that might want to host it. My hope is that the next event chooses a venue that doesn’t have such a stick up their asses about having a party and turning down the lights for a band, sheesh.

Anyway, I’d say we sparked some interest! All in all, a massive success!